this is Aliza here. if you’ve been following Zev’s hints on Flickr, you may know that there’s a very exciting littlefolk video project in the works. the idea has been germinating for a few months now, and just a few days ago we finally had our first evening of shooting! without giving too much away, here are some behind the scenes production shots. that’s our most excellent uncle Orest with the mustache. he’ll be one of the stars of the film.

here you can see something of our set-up. Zev was shooting from atop his bed.

we covered half the room with black fabric. this was taken while Zev was still figuring out the lighting for the shot.

Zev giving notes in between takes.

for a from-above shot, Zev and the tripod teetered atop desks and stools.

a little preview of how one of the shots might look.

the (rather ingenious) follow focus that Zev improvised using pliers, a pencil, and a rubber band.

well, this is what we’ve been up to. pretty exciting stuff. :] stay tuned for more! 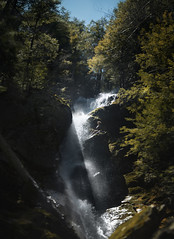